Early in 1899 violent storm in the Irish Sea lashed the Welsh coast around the Conwy area.

At approximately 10.35pm a gang of track maintenance men noticed that the sea had washed away about 60 yards of the railway at Penmaenbach between Conwy and Penmaenmawr. One of them started to walk towards Conwy with a red warning lamp to warn any approaching trains. He hadn’t reached the end of the tunnel when the goods train approached. The driver made no brake application and the locomotive, an 0-6-0 number 1418, and the leading trucks toppled into the sea.
The driver and fireman were tragically washed out to sea. The body of Driver Evans was discovered close by soon afterwards and Jones the Fireman near Deganwy, almost two months later.

At an inquest in Deganwy in March 1899 the brakesman, Hugh Charles, said the train left Llandudno Junction at 10:52pm. He told the hearing he felt the train slacken speed as though the driver had put on the brake so he at once put on his brake.
The train stopped and he went out of the tunnel, and found the front part of the train had fallen into the sea and had broken the line in doing so.

After the accident five breakdown gangs from Bangor, Crewe, Chester, Liverpool, and Warrington arrived at the scene and set to work to remove the wreckage. The engine had to be taken apart to be removed and was eventually taken to Bangor.
The track gangs worked through the night to rebuild and restore the line and one of the new tracks was ready the morning after the accident. This enabled the Irish Mail trains from London to Holyhead and back to continue their mail runs. The second track was re-opened later that day.
The breakdown gangs continued to remove all the broken and undamaged trucks and were complete by the Monday morning. The huge breach in the sea-wall was repaired using enormous blocks of granite to provide a substantial permanent repair to the sea wall.

An oil painting of the wrecked train under stormy skies by Franz Emil Krause hangs in Conwy Guildhall. 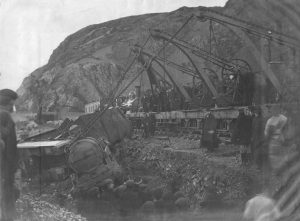 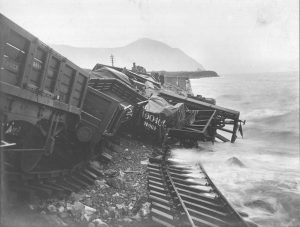 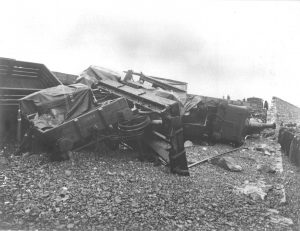