GT3, meaning Gas Turbine number 3 (following 18000 and 18100 as gas turbines 1 and 2), was a prototype mainline gas turbine locomotive built in 1961 by English Electric at their Vulcan Foundry in Newton-le-Willows to investigate the use of its gas turbines in rail traction applications. It was designed by English Electric engineer J. O. P. Hughes in a project that started in the early 1950s. Externally it resembled a steam tender locomotive, although, in the case of GT3, the tender carried kerosene fuel. The designer stated the use of a traditional chassis arrangement and mechanical transmission was to avoid complicating the prototype with (at the time of its conception) relatively untried technologies with regard to bogie assemblies and electrical transmission.

As constructed the locomotive was built with bespoke heavy steel frames which not only bore the auxiliaries, combustion chamber, turbines, heat exchanger and locomotive cab, but also provided adhesive weight for the finished machine. The frames were carried by a leading two axle outside framed bogie and three main axles. The driving wheels were of conventional design in the finished locomotive and were of 5 foot 9 inch diameter with 19 spokes and conventional balance weights. The centre axle mounted a mechanical transmission shaft driven from the turbine assembly, with power to the outer axles being transmitted by side rods. Power came from an English Electric EM27L gas turbine arrangement of 2,750 hp (2,050 kW) with high and low pressure turbines. The low pressure turbine ran continuously in operation and was used to drive the locomotives auxiliaries, with the high pressure turbine operating as higher power outputs were required. Both the locomotive and its fuel tender were vacuum braked, with vacuum brake ejectors being driven by air pressure bled from the turbine. The locomotive’s other auxiliaries (housed in its leading end beneath the large side air intakes) were shaft and belt driven.
The tender was permanently coupled behind the locomotive and contained a Spanner train heating boiler at the leading end and fuel tanks either side of a central corridor with a boiler water tank beneath. A crew toilet compartment and British Standard corridor connection were located at the rear. The six wheel chassis was based on then standard British Railways practice, albeit it with specially made and shaped side frames and bespoke tank and bodywork assembled at Vulcan Foundry.

The locomotive had a designed maximum speed of 90 mph (140 km/h), weighed 123.5 long tons (125.5 t; 138.3 short tons), and was painted in a lined Beech Leaf Brown Livery, earning it the nickname “The Chocolate Zephyr” amongst railway enthusiasts. Underframes, grilles and the front access and cab doors were painted Brunswick Green with lettering and lining in Orange.

The locomotive was taken to British Railway’s Rugby test centre in an incomplete state for testing on rollers, and then on a short section of specially laid track. After returning to Vulcan Foundry for final assembly, the locomotive was then based at the former locomotive shed at Whitchurch in Shropshire for initial light testing and crew training on the Malpas Line, before commencing loaded test runs to Llandudno. One of these runs was filmed from on board the locomotive by British Movietone News and the resulting film also shows the locomotive being turned on Llandudno Junction turntable. In the event not all of the planned North Wales Coast Line test runs were completed.

GT3 then moved to Leicester Shed on the former Great Central Main Line line for testing and crew training between Leicester and Woodford Halse and then Leicester and Marylebone. Leicester was convenient for English Electric’s Whetstone turbine works. During this period it was displayed at Marylebone for the 50th anniversary of the Institute of Locomotive Engineers. The event ran from 11–14 May 1961 and GT3 was filmed by British Pathe being inspected by the Duke of Edinburgh. Later testing was undertaken on the West Coast Main Line from Crewe over Shap summit. On one of these runs O S Nock travelled on board and was able to both witness the locomotive in operation and record its performance, his log of the trip later appearing in Railway Magazine’s practice and performance feature for February 1962. Commenting on the testing the designer noted that, despite some of the expected teething troubles and modifications, once it had departed on a test run GT3 had never failed to complete its booked workings. The locomotive was described as being comfortable and easy to handle for the crew, with conversation at normal volumes possible in the fully enclosed cab.

Despite returning favourable performances on longer runs requiring sustained power outputs, the prototype nature of the locomotive would have required further investigation and development into a configuration which would have matched the convenience of the new double ended diesel electric locomotives then being built. Neither English Electric or British Railways were prepared to fund this work as at the same time both were already heavily committed to the diesel electric concept, with English Electric in particular fully engaged in manufacturing diesel-electric locomotives of many types (including the 3,300-horsepower (2,500 kW) Deltic). These were rapidly becoming the future of rail traction with ever-increasing power to weight ratios.

Upon completion of the Shap test runs GT3 was returned to English Electric at Vulcan Foundry at the end of 1962 and stored. Following internal correspondence in September 1965 the locomotive was partially dismantled and its turbine and heat exchanger equipment removed. It was finally scrapped at Thos W Ward, Salford in February 1966 having been towed there by a BR standard steam locomotive. 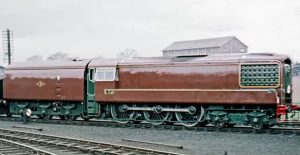 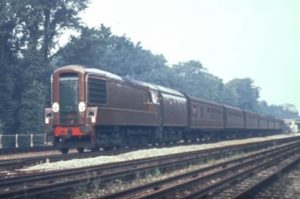 GT3 at Llandudno Junction coupled up and ready to go

GT3 at Llandudno Junction coupled up and ready to go 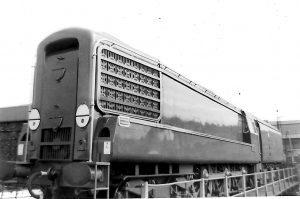 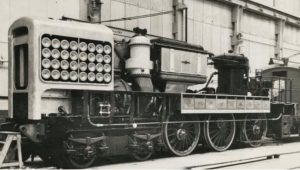 GT3 without bodywork and cab

GT3 without bodywork and cab 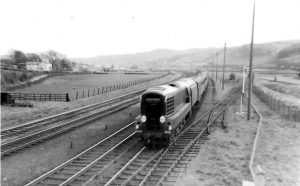 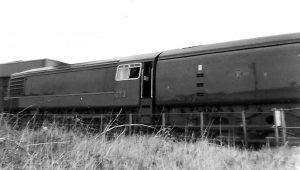 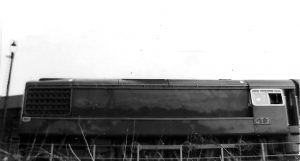